What is power factor and why is it important?

Power factor is an expression of energy efficiency. It is usually expressed as a percentage—and the lower the percentage, the less efficient power usage is.

PF expresses the ratio of true power used in a circuit to the apparent power delivered to the circuit. A 96% power factor demonstrates more efficiency than a 75% power factor. PF below 95% is considered inefficient in many regions.

How to make sense of power factor 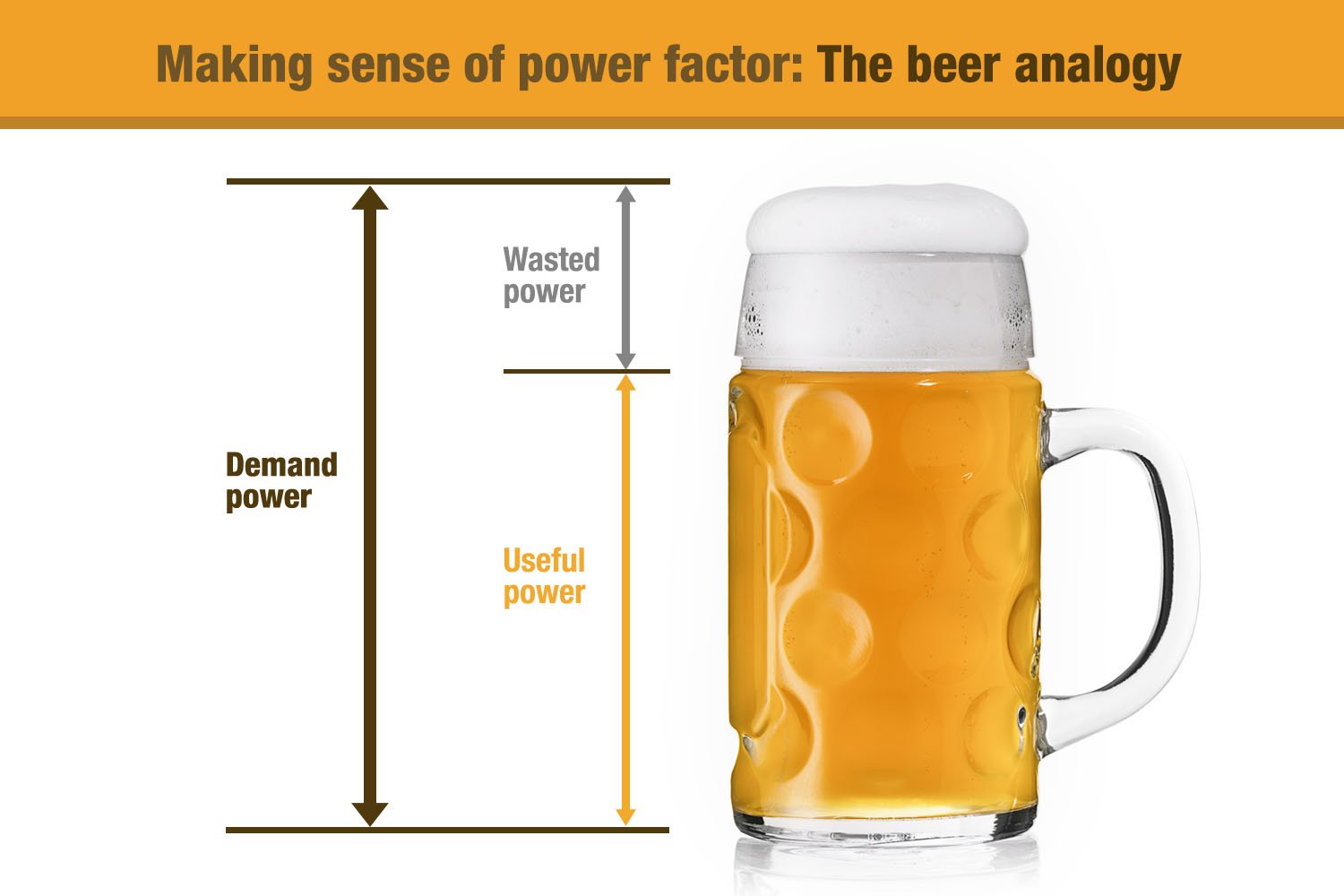 Beer is active power (kW)—the useful power, or the liquid beer, is the energy that is doing work. This is the part you want.

Foam is reactive power (kVAR)—the foam is wasted power or lost power. It’s the energy being produced that isn't doing any work, such as the production of heat or vibration.

The mug is apparent power (kVA)—the mug is the demand power, or the power being delivered by the utility.

If a circuit were 100% efficient, demand would be equal to the power available. When demand is greater than the power available, a strain is placed on the utility system. Many utilities add a demand charge to the bills of large customers to offset differences between supply and demand (where supply is lower than demand). For most utilities, demand is calculated based on the average load placed within 15 to 30 minutes. If demand requirements are irregular, the utility must have more reserve capacity available than if load requirements remain constant.

Peak demand is when demand is at its highest. The challenge for utilities is delivering power to handle every customer’s peaks. Using power at the very moment it is in highest demand can disrupt overall supply unless there are enough reserves. Therefore, utilities bill for peak demand. For some larger customers, utilities might even take the largest peak and apply it across the full billing period.

How to calculate power factor

To calculate power factor, you need a power quality analyzer or power analyzer that measures both working power (kW) and apparent power (kVA), and to calculate the ratio of kW/kVA.

The power factor formula can be expressed in other ways:

As this diagram demonstrates, power factor compares the real power being consumed to the apparent power, or demand of the load. The power available to perform work is called real power. You can avoid power factor penalties by correcting for power factor.

Poor power factor means that you’re using power inefficiently. This matters to companies because it can result in:

Finally, power factor increases the overall cost of a power distribution system because the lower power factor requires a higher current to supply the loads.

What is power factor and why is it important?